A 400-acre portion of the Reggie Wilson Farm was purchased in 1940 to construct the airport. Declaring the proposed airport Necessary to the National Defense, the federal government completed construction of four dirt runways at the airport in 1942 as part of the Works Progress Administration (WPA) program. 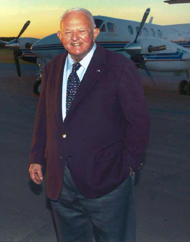 In 1946, local businessman and pilot, E.T. Crawford, initiated a government-sponsored flight school at the airport. An office and three hangars were built to house the school. The program for government-sponsored schools continued for approximately three years before it was terminated.

In spite of a decline in aviation activities and the end of the program, Terry Crawford continued to operate the airport and managed to keep flight instruction and aircraft service available to the flying public. The airport became increasingly popular as a refueling and overnight stop for transient pilots and passengers.

With a 1947 Airport Improvement Bond and matching funds from the federal government, one of the airport’s runways (15-33) was paved and lighted, associated taxiways and an aircraft-parking apron were paved, and a rotating beacon was installed at the airport. On July 29, 1950, the upgraded facility was formally opened under the name of Del Rentzel Field.

In 1965, the name of the airport was officially changed to East Texas Regional Airport. In 1969, a non-directional radio beacon approach, plus a VHF omnidirectional range (VOR) approach utilizing the Lufkin Federal Aviation Administration (FAA) omnidirectional facility was authorized by the FAA. The city then purchased the radio beacon and installed it on the north approach. The FAA approved a VOR system approach greatly enhanced the all weather versatility of the airport.

Construction of today’s primary runway (18-36) was completed in 1986, at a length of 5001 feet and a width of 75 feet. A 35-foot wide parallel taxiway was constructed on the east side of the runway at the same time. In 1987, to honor their retiring mayor for the years of dedicated service and special efforts in the development of the airport, A. L. Mangham, Jr. Regional Airport became the new official name of the city’s airport.

In 1991, the city initiated improvements in the instrument approach capability of A.L. Mangham Jr. Regional Airport, and a partial instrument landing system (ILS), consisting of a localizer, Distance Measuring Equipment (DME) and outer compass locator, was subsequently installed on Runway 36. In 1993, additional equipment was added and a full ILS was commissioned in March of 1994.